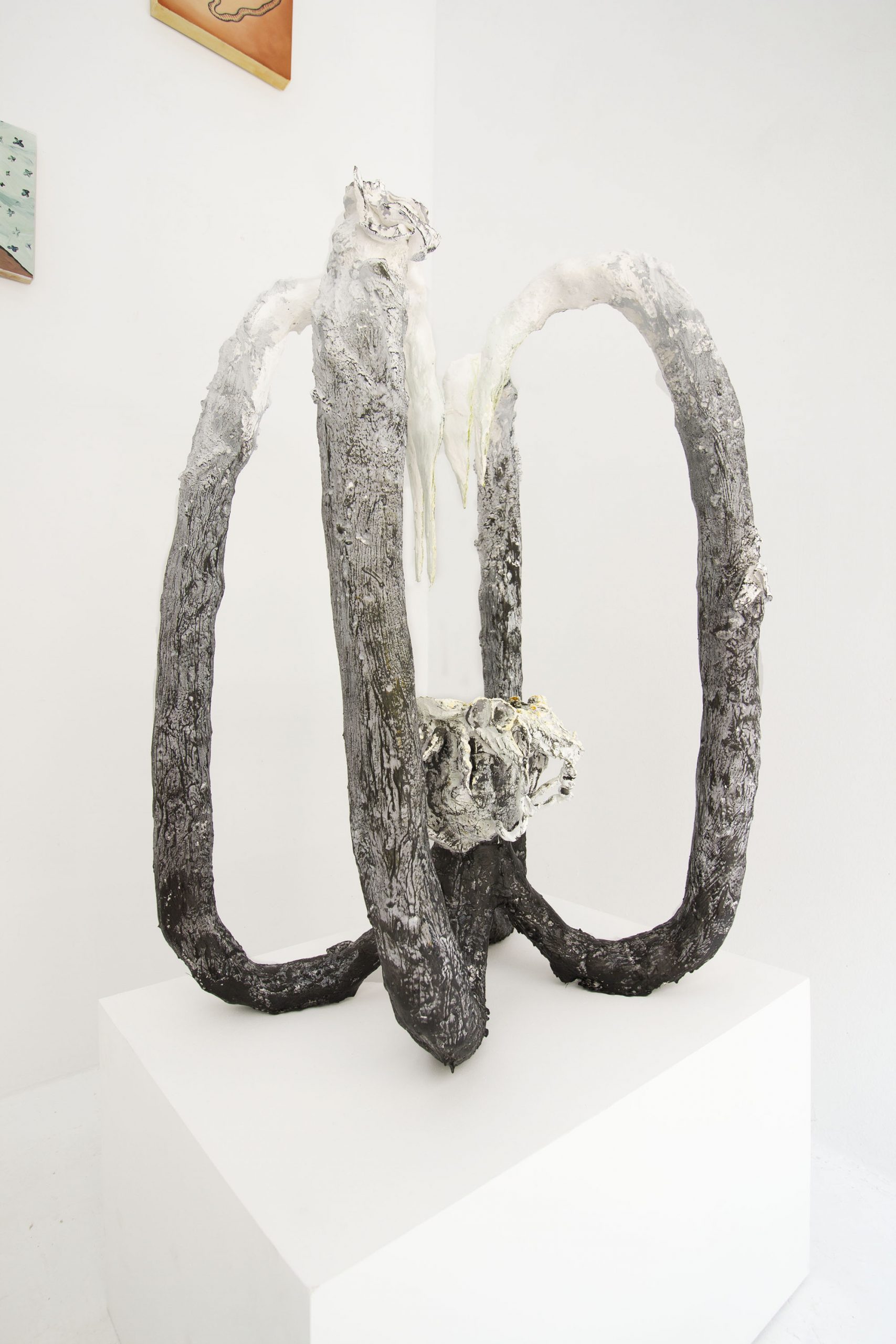 Exhibition & Press Release: “In-Between the Flurry” at Below Grand, NYC

A wrinkle in a bed sheet might measure up to the same amount of time it takes to walk the stairs alongside the exterior of the contemporary building at LACMA. It’s the space of the in-between, the place that only exists because it’s related to other places and objects but doesn’t have a position of its own. You don’t start there, and you don’t end there, but you are there for moments in time. It’s a place where there’s a shift in perception, a place where we’re caught in a flurry.

Jon Pinn’s painting “By” lives in-between where ephemera and architecture collide. A dark shadowy band of grey seems to define an edge, an extension of a two-dimensional outer boundary, but one that dissolves with the rest of his traces on canvas. Swirling quick and clinging onto the air, his marks hover, as if Byredo Baudelaire was sprayed at the once chic Barney’s creating space.

Amanda Martinez’s practice orbits around carved repetitions of undulating beats, a place to be in the presence of phonons in optical mode. In her piece “Ear to the Ground (T. Lucida)”, a wavelike cadence unfolds and slips onto the surface of the floor, extending a strophic form. Weaving in and out, Martinez’s work pings the mediate space of a heartbeat.

Carrie R’s work exerts candor from the kitchen or the garden in lieu of mid work, finding comfort in her objects apprehending one another. “fountain” sits on a pedestal with four limbs curled up and downward towards a wilted flower like orifice, as if it’s in-between is searching to find it’s space within itself.

Kady Grant visits the notion of body as objectness and vice versa. A kind of interobjectivity, perhaps as Morton might view it, in “Ancient Water” and “Loop”, both, images of objects playing a note on the other. What could be the tune of snake scales on a belly sound like or an eyelash brushing along a ceramic teapot?

Similarly, Carrie Cook’s piece “Soft is Hard” depicts a meaty hand, clinging onto a shell, piercing into a belly button or flesh like orifice. As she blurs the periphery of all surfaces from their beginning to their end, we witness color as they relate to each other.

Kady Grant is based in Queens, New York (b. 1989). She received her BFA from the School of Visual Arts in New York City in 2011. Her most recent solo show was at Dress Shop Gallery, Brooklyn in 2017. She has since participated in group shows at Marinaro Gallery, NYC, Big Pictures Los Angeles, CA, Blake & Vargas, Berlin, Germany, and Tchotchke Gallery, virtual/NYC. Her work was featured in the London based publication, Buffalo Zine, issue 9, 2019.

Jon Pinn (b.1987, Wimbledon) studied Painting at Brighton University graduating in 2009, then Glasgow School of Art in 2016. He has participated in and curated group shows across the UK, including ‘Wedges’, Mercer-Chance, London and ‘Pendolino’, New Glasgow Society, Glasgow. He currently lives and works in London. This is the first presentation of his work in the US.

carrie R (b. 1990, New Jersey) is a Philadelphia-based artist whose works are three-dimensional, mixed-media formations of her thoughts on fear, solitude, mobility, and beauty. These forms can appear familiar, plant-like, and domestic with moody and otherworldly character. carrie received her BFA from Mason Gross School of the Arts at Rutgers University and is the recipient of a Common Field Travel Scholarship and a James O. Dumont Travel Grant Award. In her former New Jersey shore community she co-founded, and co-organized exhibitions by, the collectives New Art Syndicate and Carrie & Morgan.